Please make sure this important date is in your Calendar!

We encourage all families to support this important Seminar as we work together to ensure our children have a voice and that parents feel confident in talking to their children about child safety. This is a parent only event. We hope that every family will be able to attend. The cost is $10 per family. This event is supported by the School Advisory Board.

Please click on the link to pay and make a booking. https://www.trybooking.com/BEEVQ

A flier will be sent home today.

Due to unforeseen circumstances we have had to make a change to the venue for our School Concert and the scheduled date. It is always difficult when dates need to be changed and it is certainly something that we tried to avoid. In this case it was out of our control. I hope this will not cause too much inconvenience to our families.

It is very exciting that every second Tuesday the whole school at the same time are working the important elements of what it is to have healthy relationships/friendships.

Doing the program as a whole school means we all use the same language when it comes to friendships.

May I encourage you to ask your children what they are doing in this program.

As we develop the program further we hope.to have more parent involvement.

This year is dipping our toes into the program so we can roll it out fully in Term 1 of 2020.

Charlotte and her dance team did an amazing job in the International Dance Competition on South Africa, getting a Gold medal in show dance (Cat in the Hat), Gold medal for Jazz (Black Cat) and Bronze medal for Hip Hop (Nerdy). The top 5 performances overall in each age group then competed in the Gala (Finals) and their dance Cat in the Hat won a first place Cup. Thank you to everybody who helped us by purchasing some cupcakes and slices at the stall to help with fundraising. We raised $675 on the day which has helped to pay for the extra fees to rehearse each Sunday and to help purchase some of the costumes. We have now qualified for the World Cup held in Mexico City next year so there may be another cupcake stall next year. 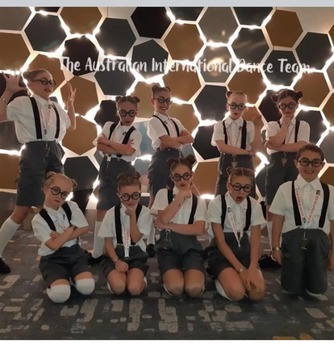 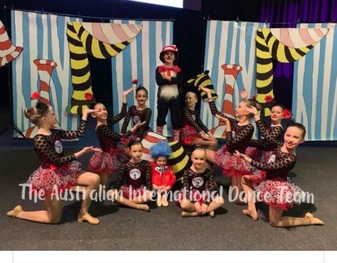 We have a pick up and drop off zone in Riddle St that is signed "no parking" that needs to be used according to the road rules. This is a 2 minute zone and is exactly the same as ‘Kiss and Go’ - the same rules apply. The times these rules apply are 8:15 - 9:15 am and 3 - 4 pm on school days.

The 'no parking' sign, means you can stop for 2 minutes in that area:

If you stop in, or partly in, an area showing a no parking sign and you are not picking up or dropping off passengers or goods, or you stay for longer than 2 minutes you are considered to be parked and can be fined.

This works efficiently if everyone abides by the time restrictions and moves on. If your children aren’t ready when you arrive, you need to move on and let others use the facility.

Other issues that we are having:

Double Parking – when cars pull up alongside legally parked cars and allow their children to jump out or in the car, holding up traffic behind them and risking the safety of their children.

Parking in or across driveways – parking over or in nearby driveways not only causes disharmony between the school and the neighbours, but is illegal.

Driveways are used by pedestrians, cyclists and vehicles and must be kept clear.

I ask that all parents who use the pick up and drop off zone to read the above information carefully. Child safety is our number one priority.

A reminder to parents to respond to the Caremonkey request regarding the Headhunters Program. Currently we have 40 families who have not responded.

Have a great week.

WHAT WOULD YOU CHOOSE TO DO?

We can all act this way if we choose to. A world of love, care, nurture and joy is possible. But for
this to happen we all need to choose to live this way. Read this beautiful story and it may help you
to continue to choose the path of love.

What would you do? You make the choice! Don't look for a punch line -

There isn't one! Read it anyway.

The question is: Would you have made the same choice?

At a fundraising dinner for a school that serves learning disabled children, the father of one of the students delivered a speech that would never be forgotten by all who attended.

After extolling the school and its dedicated staff, he offered a question:"When not interfered with by outside influences, everything nature does is done with perfection. Yet my son, Shay, cannot learn things as other children do. He cannot understand things as other children do.
Where is the natural order of things in my son?" The audience was stilled by the query. The father continued. "I believe that when a child like Shay, physically and mentally handicapped comes into the world, an opportunity to realize true human nature presents itself, and it comes, in the way other people treat that child"
Then he told the following story: Shay and his father had walked past a park where some boys Shay knew were playing baseball. Shay asked, "Do you think they'll let me play?"

Shay's father knew that most of the boys would not want someone like Shay on their team, but the father also understood that if his son were allowed to play, it would give him a much-needed sense of belonging and some confidence to be accepted by others in spite of his disabilities.

Shay's father approached one of the boys on the field and asked if Shay could play, not expecting much. The boy looked around for guidance and a few boys nodded approval, why not? So he took matters into his own hands and said, "We're losing by six runs and the game is in the eighth inning.
I guess he can be on our team and we'll try to put him in to bat in the ninth inning."

Shay struggled over to the team's bench put on a team shirt with a broad smile and his Father had a small tear in his eye and warmth in his heart.

The boys saw the father's joy at his son being accepted.

In the bottom of the eighth inning, Shay's team scored a few runs but was still behind by three. In the top of the ninth inning, Shay put on a glove and played in the right field. Even though no hits came his way, he was obviously ecstatic just to be in the game and on the field, grinning from ear to ear as his father waved to him from the stands. In the bottom of the ninth inning, Shay's team scored again. Now, with two outs and the bases loaded, the potential winning run was on base and Shay was scheduled to be next at bat.

At this juncture, do they let Shay bat and give away their chance to win the game?

Surprisingly, Shay was given the bat. Everyone knew that a hit was all but impossible because Shay didn't even know how to hold the bat properly, much less connect with the ball. However, as Shay stepped up to the plate, the pitcher, recognizing the other team putting winning aside for this moment in Shay's life, moved in a few steps to lob the ball in softly so Shay could at least be able to make contact.

The first pitch came and Shay swung clumsily and missed. The pitcher again took a few steps forward to toss the ball softly towards Shay as the pitch came in, Shay swung at the ball and hit a slow ground ball right back to the pitcher.

The game would now be over, but the pitcher picked up the soft grounder and could have easily thrown the ball to the first baseman. Shay would have been out and that would have been the end of the game.

Instead, the pitcher threw the ball right over the head of the first baseman, out of reach of all team mates. Everyone from the stands and both teams started yelling, "Shay, run to first! Run to first!" Never in his life had Shay ever ran that far but made it to first base.

He scampered down the baseline, wide-eyed and startled. Everyone yelled, "Run to second, run to second!" Catching his breath, Shay awkwardly ran towards second, gleaming and struggling to make it to second base.

By the time Shay rounded towards second base, the right fielder had the ball, the smallest guy on their team, who had a chance to be the hero for his team for the first time. He could have thrown the ball to the second-baseman for the tag, but he understood the pitcher's intentions and he too intentionally threw the ball high and far over the third-baseman's head.

Shay ran toward second base deliriously as the runners ahead of him circled the bases toward home. All were screaming, "Shay, Shay, Shay, all the Way Shay."

Shay reached second base, the opposing shortstop ran to help him and turned him in the direction of third base, and shouted, "Run to third!Shay."

As Shay rounded third, the boys from both teams and those watching were on their feet were screaming, "Shay, run home!"

Shay ran to home, stepped on the plate, and was cheered as the hero who hit the "grand slam" and won the game for his team.

"That day,"said the father softly with tears now rolling down his face, "the boys from both teams helped bring a piece of true love and humanity into this world."

Shay didn't make it to another summer and died that winter, having never forgotten being the hero and making his Father so happy and coming home and seeing his Mother tearfully embrace her little hero of the day!

On Wednesday 14th August the Grade 5 students will be participating in the Come and See Programs at OLSH and St James'. The boys have received a Caremonkey request permission from as they will be travelling by bus. The girls are walking to OLSH and this is covered by our General Permission form.

The programs run between 9am - 12:30pm approximately. 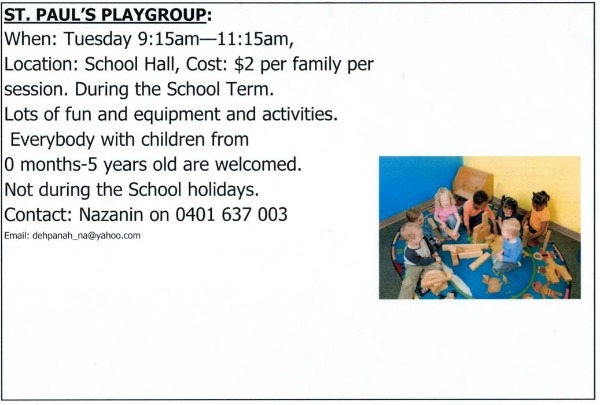