Preparations for the Mysterious Dream are well underway for a wonderful performance on the 24th of October at OLSH.

Tickets will be limited to 3 tickets per family, (you do not book a ticket for your St Paul's child/children) and will go on sale tomorrow through Try Booking which is an online booking system.  Click here to book: https://www.trybooking.com/BFFND

In previous years we have had a matinee performance but this year due to the late change of venue and the fact that it is fete week we unfortunately will not be able to stage one this year.

More information regarding costumes and times will be sent out through Care Monkey in the coming weeks.

In 2019, our school is participating in Catholic Education Melbourne School Improvement Surveys (CEMSIS). CEMSIS is an annual process where schools listen to the thoughts and feelings students, families and staff have about how their school can improve. These surveys help inform the ongoing improvement of our school.

Catholic Education Melbourne provides access to 80 families to participate in the online survey. One of the main goals of the family survey is to identify the strengths and areas for improvement in our school.  CEMSIS data benefits everyone within our school and provides valuable community insights on areas that each school can focus on. Our school believes it is important to encourage families to have a voice and contribute to shaping the ongoing improvement of the school.

This week 80 families will be invited by email to take part in the surveys. I urge all of these families to participate and provide us with your insights.

A letter will be emailed out to all families of children in Years 4, 5 6 explaining that their children will have an opportunity to particiapate tin the survey over the next three weeks.

Thanks to all the families (and Staff) who made our Book Week Parade such a success. It was a fabulous day that the children thoroughly enjoyed. Thanks to Despina and Danni Molino for their efforts in ensuring that we had a wonderful celebration for the week.

Here are some pictures of the parade! 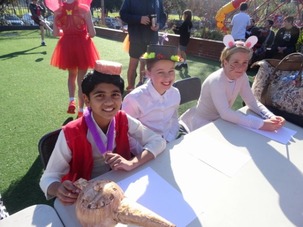 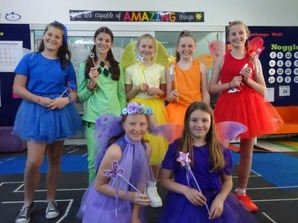 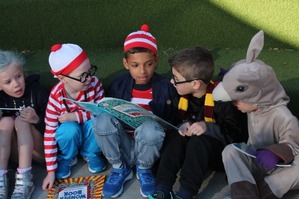 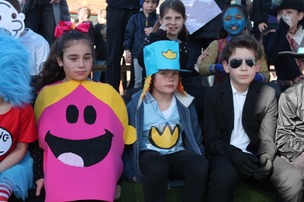 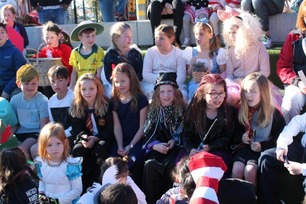 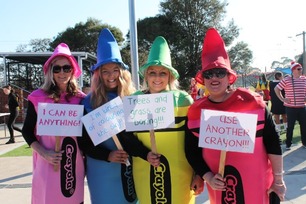 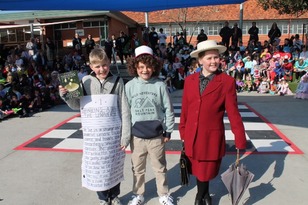 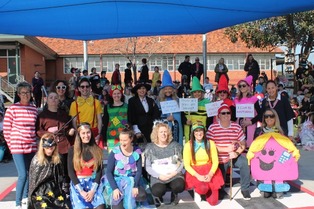 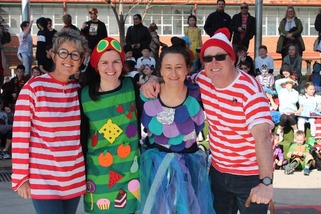 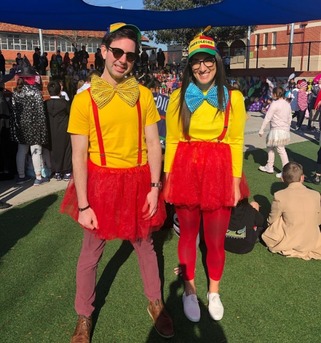 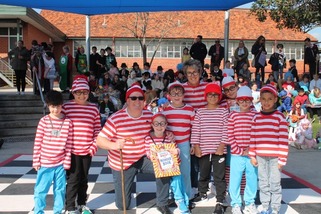 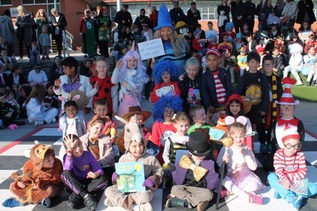 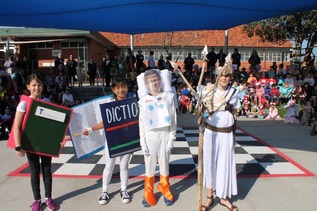 Fathers' Day Breakfast and Fathers' Day Stall
A very big thank you to all the mums that helped make Fathers' Day a very special celebration at St Paul's. Thank you to Georgie Davoren who co-ordinated the Breakfast and to Shannon McAuliffe who co-ordinated the Fathers' Day Stall and to all their helpers. These events could not occur without our wonderful parent support. And as always a big thank you to Mr Maher for all his behind the scenes help!
FRIDAY 20th SEPTEMBER 2019
This is the last day of term and we will have a Communion Service in the Church at 10.30am.  All parents and guardians are invited to attend to celebrate this last day of term.
At 11.45am we will have the Footy Parade.  Everyone may come come to School in their favourite football colours.
The parade will be followed by a sausage sizzle in bread.  Their will be gluten free sausages and bread available.  Please make known to teachers if you need such requirements.
Students will then have time to play in the Park across from the School from 1.15pm till 2pm. School will finish @ 2.30pm for the term.

Just to let people know Catherine is currently on sick leave and is not at school for the next two weeks. Catherine has had a significant back issue that has seen her hospitalised. I ask you to please keep her in your prayers.

Thoughts With a Cuppa 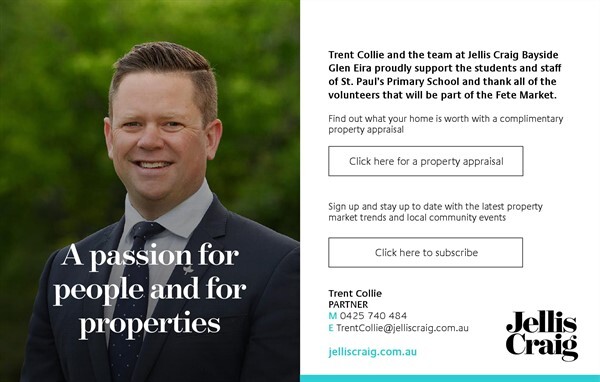 Sport News from the Weekend!

On Saturday the 31st August, after months of training every Sunday afternoon, the Dads of St. Peter’s and St. Paul’s played their 4th annual Battle of the Saint’s football game. The game was played at Centenary Park in very windy conditions but that did not stop the demonstration of skills that even Bruce McAvaney would describe as “special”. The game was played in good spirits and both the players and the large crowd enjoyed the whole experience. It was awesome to see the families of St. Peter’s and St. Paul’s get together for such a wonderful community event.

This game doesn’t just happen and I would like to thank several people for their outstanding contributions to helping make the day run so smoothly. I would like to acknowledge the following people for their help and I apologise if I miss anyone. Sammy Robertson for coaching the team, Ben Logan our inspirational Captain and for providing the Physio and strapping. Paul Commerford working the white board, Matt Regos as Team Manager, Adam Murphy for helping with post match refreshments,  Greg Ryan for running the boundary and Hayden Brown behind the goals. A big thanks to Vicki Durston, Lou and Steve James and all the wonderful volunteers at St. Peter’s Junior Football Club who went the extra mile to make the day amazing and Phil Odlum for designing the logo.

The dads football game is a fantastic community event and allows dads from the school to get to know each other and make great networks.

Well done to all the Dads who represented St. Paul’s. You made us all proud!

ST PETER'S UNDER 12 GIRLS TEAM
St Peter's U12 Girls Div3 Football team won the Grand Final against Prahran in a great team effort that included two girls from St Pauls School.
A big effort from Jasmine Draper and Ashlan Morgan who both kicked goals throughout the year, that helped the St Peters Football team achieve a place in the Grand Final after 15 rounds with a Top of the ladder minor premiership. Both girls played the Grand Final in team spirit with Ashlan also kicking a goal to help the team win the Premiership for 2019.
Also a big thankyou to our main Umpire for the 15 rounds, Cath Knights  (her daughter Lily also playing in the team), who put in a consistent fair effort in umpiring decisions throughout the rounds.
We are very proud how the girls from four different schools united in the spirit of friendship and teamwork to win the Grand Final 2019.
St Peters 5 Goals, 7 points, (Finished Top of the ladder minor premiership)
Prahan 1 Goal, 1 point
Braydyn Draper
U12 Girls Div3 Team Manager - St Peters 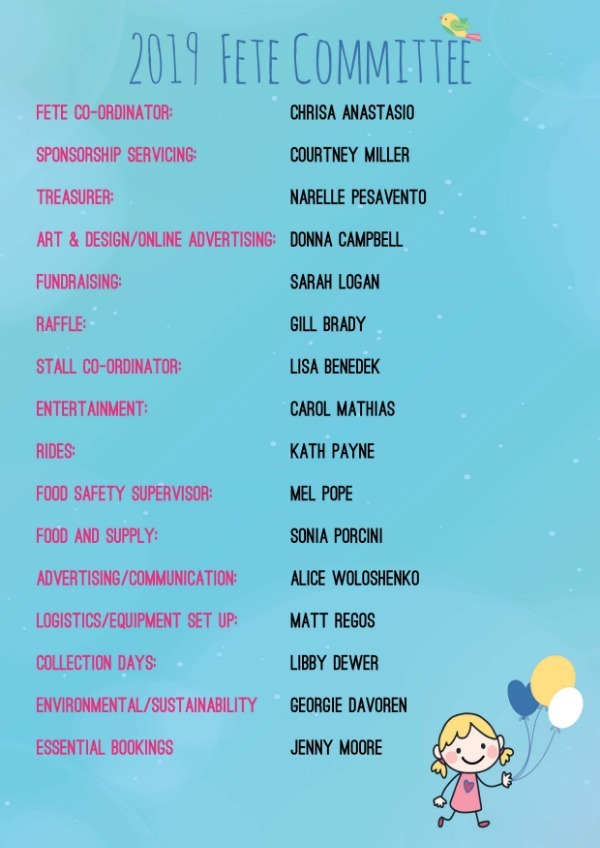 Read More
Dear Parents,
By now you should all have received an email from Customer Service regarding the holiday club at St Paul's. Due to works being carried out here, we are unable to offer our planned holiday program.
However the holiday club at St Peter's East Bentleigh is operating and I strongly encourage you to book your children in there. I will be coordinating with Carrey the lovely new Coordinator at St Peter's. Sue Duffy and Allard will also be there so the children will see familiar faces.
Lots of fun themes and activities have been planned including four excursions,  Roller Skating in Mordialloc, Bowling and laser Tag at Strike Bayside,  Inflatable World in Oakleigh and Science Works.
Come along and join in the fun!
Brochures are available at the sign in table and online through our website
The activities were chosen were chosen in consultation with the children
PLEASE NOTE:
Before making your booking & cancellations All children must be enrolled with OSHClub prior to booking via oshclub.com.au. Bookings made within 5 days for a Vacation Care session will incur an extra charge of $4.00 per day per child. 7 days notice is required for cancellation of a Vacation Care booking to ensure you will not incur out of pocket costs. Please note that bookings can not be made online within 5 days of the session commencing. In order to book within this period, you will need to contact the service directly, the Customer Service and Billing Team on 1300 395 735 or by emailing oshaccounts@junioradventuresgroup.com.au.
We look forward to seeing you there! 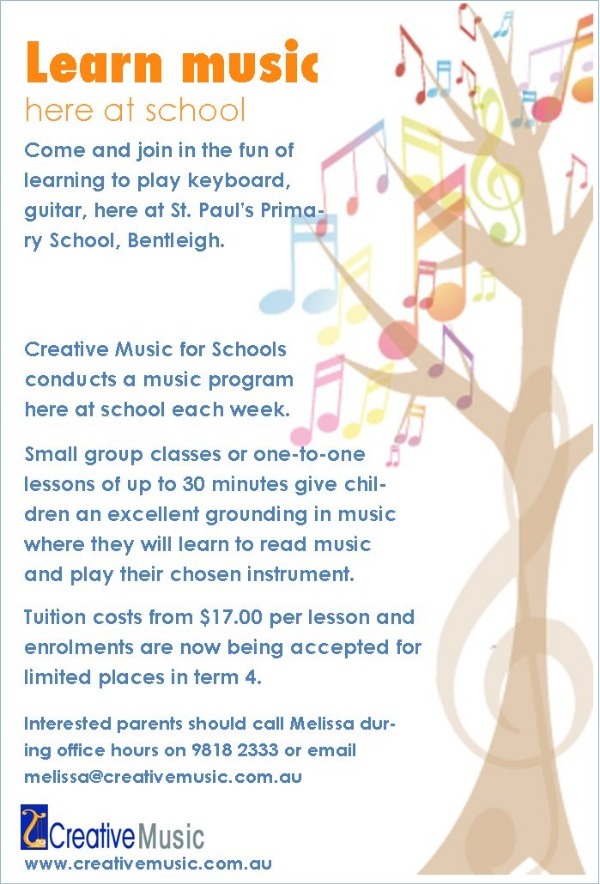 Last week to book your ticket to see International Parenting expert Andrew Fuller on the 12th of September - Don't miss out!

You can hear Andrew talking about unlocking your child's genius here:

In this fun and informative presentation, Andrew will give you the tools every parent needs to help with the most important job there is. Author of 12 books including TRICKY KIDS, GUERRILLA TACTICS FOR TEACHERS & HELP YOUR CHILD SUCCEED AT SCHOOL, Andrew presents the latest research and advice in a way that makes sense and works!