St Paul's was opened in 1928 and was originally staffed by the Presentation Sisters. In 1934 St. Paul's was taken over by the Daughters of Our Lady of the Sacred Heart. In 1945 the population in the area increased, which necessitated the original three classrooms being extended to five and in 1951 another building was erected housing three extra rooms. In 1992 the Sisters decided to devote their limited resources to their Secondary Girls College in Jasper Road. In 1993 St Paul's appointed the first Lay Principal. During 2015 the final stage of building was completed and the school now has 14 classrooms, a refurbished hall and outstanding facilities. 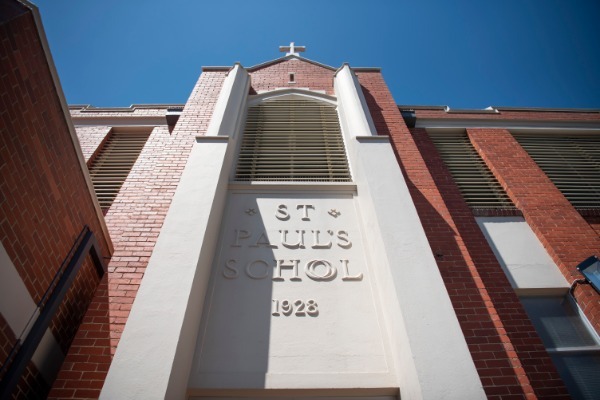 Dear Year 6 Parents, I have contacted Cable Park regarding the weather tomorrow. Big Day Out will be going ahead although the weather will not be great. Most of the rain (1-5ml) will fall before 8am with a max of 16 degrees. If your child has a wetsuit or a long sleeve rash vest it would be advisable to bring them along in their bags. The Park has some wetsuits but limited sizes. Staff attending tomorrow include Liz Heath, Gabrielle Berends, Danny Maher, Freda Tahtouh and Matilde. I know the students are all looking forward to a wonderful day. Kind Regards, Catherine

Dear Parents, St Paul’s is running an Election Day Cake Stall this Saturday November 26th and we’re asking all St Paul’s families to kindly donate a cake/slice/biscuits/cupcakes for the stall. Your eldest child should have received a cake bag this week with the Cake Stall information as well as a sticker that needs to be filled out and attached to the bag. Cake Stall donations can be dropped off at the school office tomorrow (Pupil Free Day) between 8am-3pm as well as on the day, in the morning from 8am. No refrigeration is available on Friday so please me mindful not to drop off any items with fresh cream etc. If you would like to help out at the Cake Stall this Saturday, we’d really appreciate it. We’ll be setting up from about 7:30/8am and aim to start selling by 9am or ASAP. I need to leave by 12pm and would love if someone could please volunteer to help pack the stall up afterwards-we hope to be sold out by 2pm or so or even earlier! Please email me on dkhamu.thermomix@outlook.com or call/text me on 0402108798 if you’re available and can help out in any way. Thank you to all of those who have already put their hand up to serve on Saturday. I know that there are some keen St Paul’s bakers out there (feel free to go nuts!), we have spare cake bags available at the school office. If you have any questions, please don’t hesitate to contact me anytime on the email or mobile number provided above. We truely appreciate all of your effort and generosity in helping out with this fundraising event for the school. Kind regards, Diana Khamu