At the beginning of Term 2, we introduced a new way of teaching spelling. All staff received a full day of professional learning and have continued to build on their knowledge and skills in professional learning teams this term.  SMART is an acronym for the sequence teachers follow to teach words to students (Say, Meaning, Analyse, Remember, Teach). There has been a very positive response from teachers, so I thought I would catch up with some students to see what they think.

This Term in Year 6 we started a new spelling called SMART Spelling. It is a brilliant way to advance our vocabulary and to teach us how to spell new words. I am enjoying using many of these words in writing my narratives and persuasive texts. I wouldn’t exactly say it is loads of fun but it requires a short amount of time each day and it is an effective way to help us be better. So I like it much better than any other spelling programs we have used.  Maddy D Yr 6

We do SMART spelling in Yr 6. Each Monday we choose 10 words from either the red, orange or green lists. We learn how to break up our words into ‘graphs’ which helps us to spell words more easily and identify the number of sounds, syllables and the tricky part of each word. The graphs are helping me to break the words down and be a better speller. On Friday we do a spelling test and so far I am getting 10 out of ten!

In Year 1 we do SMART spelling. We like it because we get to learn how to spell tricky words and its fun! Every time we do spelling we learn new things. I like SMART spelling  because you get to write in sentences and use fancy writing using glitter pens. Miss Moore really likes it when Kiera does her twirly writing.  We do spelling every day. Every Friday we do a test and I’m doing really well.

Olivia Lentzios in 3AW has been selected for a special part in this years ‘Winter Showcase Concert’ for the Australian Girls Choir, where she will perform at Robert Blackwood Hall on 15 June. Olivia will be performing  a solo poem as well as a solo singing part. A hidden gem! Congratulations on an outstanding achievement and best wishes for your big night.

Congratulations to Luis Sutton (Yr 5) and Murphy Behnk (Yr 6) who have played in the National Basketball Tournament over the long weekend and came 7th in Australia. Great work boys. Many of our students play at high level basketball and we are proud of their achievements. Luis Sutton has also been invited to attend the ‘Victorian Metro Showcase’  which is a camp for high performing athletes over a four day event in July.

On Friday of Week 9, all students will receive their Semester 1 Reports. I have read each child’s report and feel very proud of their achievements. I would like to thank all the staff for their care, dedication and professionalism as they support students in their growth and learning. In Week 10 we welcome parents to meet with their child’s teacher to discuss the report , view evidence of learning and set goals for the Semester ahead. Parents are asked to book their appointments online when they receive the booking details. This will be emailed on Friday.

Despite a cold and blustery morning, our hearts were warmed as we celebrated this very special event on the school calendar. The day began with prayers, stories and songs as we celebrated and gave thanks for the wonder of grandparents and special people in our lives.  Our visitors were soon put to work in classrooms as the students shared a special activity before coming over to the Hall for a sumptuous morning tea. Thank you to Mr Ed Dooley and Matilde for preparing the Liturgy, to the staff and students for welcoming the visitors into their learning space and to Audrey Craig & Bec Belej and the team of parents who prepared and served morning tea. The Year 6 students did an outstanding job of serving on tables and making everyone feel welcome. Thanks also to Mr Aaron Juliff for preparing the slideshow. 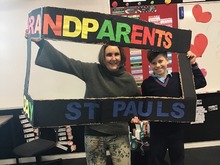 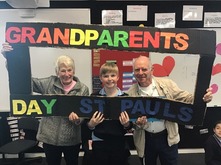 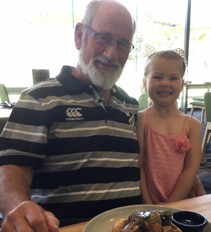 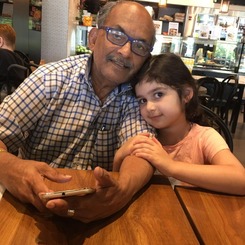 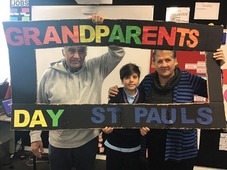 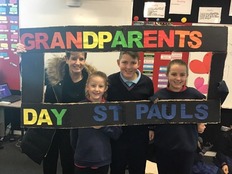 Last Friday the new school websites went live. In our revamp of the way in which we communicate with current families and prospective families we have created our e-Newsletter, Schoolzine App and now the new website. I thank the school boards for their input to the design and content of the webpage and we would certainly appreciate any feedback as to how we can improve it. We see the eNewsletter with all the current parent information in the sidebar and the App for our existing families and the website as a first ‘port of call’ for next families.

The St Paul’s site is https://spbentleigh.catholic.edu.au/

Keep warm and have a great week.

Thoughts with a Cuppa: Term 2 Week 8

A must read!
Edward Dooley (Mission and Faith Leader)
Tend and befriend
The feast of the Visitation, the meeting between Mary of Nazareth and her cousin Elizabeth,
is observed on May 31. (Artwork: The Visitation by Janet McKenzie) 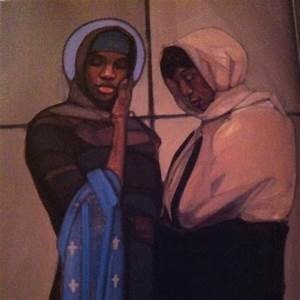 On Thanksgiving Day, 2008, a popular TV morning news show featured the story of the
mother of a 22-year-old soldier who had been killed in Iraq. Part of a supply convoy
servicing the perimeter of Baghdad, his Humvee had been hit by an explosion-rigged vehicle.
Just days after his twenty-second birthday, the young man and two of his best friends were
dead, the other, permanently brain damaged. His mother, reading the diary returned in his
army trunk, discovered the names of the friends who had been killed and wounded with him.
Then she searched the United States until she found their mothers. In their mutual pain, these
women have found both support and understanding. “There is no difference in our grief. It’s
absolutely painful,” Doris said. “There is nothing in the world that is going to bring our boys
back, but we have each other.” For this small bit of shared humanity, for this cocoon of
emotional safety, for this personal place of support in their grief and the hope of sustenance it
brought for the future, they were thankful.
It is, I think, the same story Janet McKenzie is begging the world to see in her painting, The
Visitation. The faces of Mary and Elizabeth, dark and sombre, thoughtful and aware, in
McKenzie’s Visitation say something far beyond either the exultation of pregnancy or the
creative power of it. This is not a picture about the delirium of motherhood. There is a storm
stirring in the hearts of these women–deep and different than most at such a moment as this,
something epochal and eruptive.
Women scholars have for long now pointed out that at the moment of change, in the face of
awesome, perhaps even terrifying awareness of her situation, Mary does not go to her fiancé,
Joseph, for understanding. She does not go to her father for protection. She does not go to the
priests of the Temple for vindication. No, Mary goes to another woman. Mary, the pregnant
but unwed woman, travels to the hill country to be with her old cousin Elizabeth, who is also

pregnant, also dealing with overwhelming change and the isolating implications of it in her
life. None of it, the two women knew and the academic world realized over the centuries,
made any human sense. After all, to be unmarried and pregnant in the Middle East of that
time was dangerous space for a woman. She can be driven out of the family. She will
certainly be forever disgraced. She can be stoned to death. So, it seems sensible to wonder,
why go to another woman, an old woman, who can herself do nothing to save her, who has
no power to make the social situation better?

But to a woman it makes sense. Seeking the support of another woman in the midst of
struggle has made emotional sense to women for centuries. And now it makes scientific
sense, as well. According to principal investigator Shelley E. Taylor of a UCLA
study, Behavioural Responses to Stress, “For decades, psychological research maintained that
both men and women rely on fight or flight to cope with stress–meaning that when
confronted by stress, individuals either react with aggressive behaviour, such as verbal
conflict and more drastic actions, or withdraw from the stressful situation.”

But, these researchers discovered, the participants in the five decades of research that
consistently confirmed the “fight or flight theory” were primarily men. The UCLA study,
using women rather than men for the first time in the history of the study of stress research,
discovered that,“fight or flight” is not the primary or normal response of women. Instead,
science now understands, women under stress “tend and befriend.” They gather with other
women to construct other means of dealing with conflict and pressure, rather than aggressive
ones. Women, under stress, they found, take care of one another. They take care of children.
They continue to concentrate on the functioning and development of the human community.
They bring stability to situations of tumult and confusion.

Now science knows what scripture and art, women and society, have known for eons. Mary
and Elizabeth, Doris and the mothers of her son’s now dead soldier friends–women
everywhere–calm the chaos of the world. They show us all another way to be in the midst of
the daily maelstroms of life. They help us survive. They bind us together to carry each other,
to carry the human community, to allow others to carry us when we cannot carry ourselves.

To look at McKenzie’s Visitation is to look at an alternative world. It is to define the role of
women in a new way. It gives new dignity and meaning to the friendship of women. It gives
us all reason to believe that there can be another way through conflict other than force.
—from &quot;The Visitation,&quot; by Joan Chittister, in Holiness &amp; the Feminine Spirit: the art
of Janet McKenzie (Orbis, 2009)

Congratualtions to to the following children who have completed the Sacrament of Reconciliation recently. 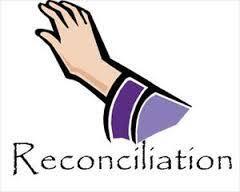 A new item is available for purchase at PSW (our uniform supplier 596 North Road Ormond) and that is long navy blue socks that the girls can wear as an alternative to tights. They are $17.95 for a pack of three. They do not have the red stripe.

The second hand uniform shop is open on the last Monday of the month. The next date is Monday 24th June. If you have donations of second hand uniform please drop them to the office. It would be appreciated if the items are washed and are in good condition. Please no socks. Thank you. 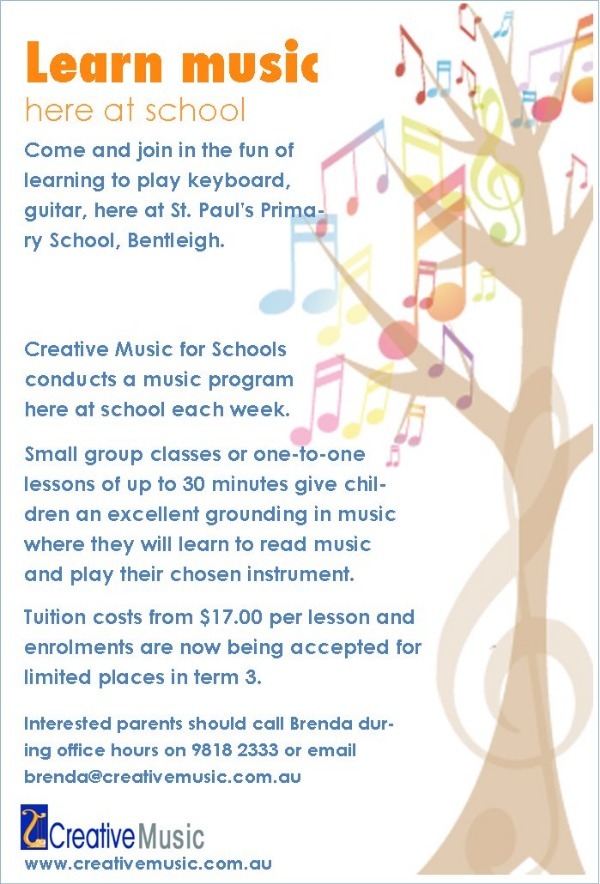